So about a week after I had calmed down from the realisation my book was really and truly going to be published, the reality of what a book actually was started to sink in.

They're a bit more than words you see... In another post i'll talk about why I am now a firm believer in the old fashioned publishing model, but lets sum it up for now that I am someone who often needs someone else to tell me what to do. One of the things my editor reminded me about was that stories like mine need maps.
The mix of joy and fear quickly filled my chest at this, for one of the things I have loved about the genre since childhood are the maps that both tease you with a new world, and can be studied later once those lands are well traveled by the heroes and their readers. A much better analysis of all this can be found here and if you follow the links at the end of this quite thorough investigation into fantasy maps, you will start to understand the anxiety that quickly replaced the joy in my heart: Maps are final, and they'd better look good.
That's two problems (and again I have to point out these are both filed under "problems I'm glad I have") that only the author of the work can really fix. Even if my publisher had the budget to pay someone to design a map, i'd still have to give some pretty detailed drawings (and don't forget all those place names) to the artist. But here began a sub-problem: even though I am an Art teacher by day, cartography has never been a skill I posses. So I did what any rational mind would do in 2011, and turned straight to google. And who would have thunk it, even though many people think that beyond the clear waters of the face books, the interweb is marked with "here be dragons" there are still many thriving communities that come together not to update each other on their latest thoughts, but in the case of the Cartographer's Guild, bond over their shared passion for a skill I desperately needed to acquire.
One particular photoshop tutorial that didn't immediately fill my heart with dread was discovered, and like Captain Cook stepping onto a new land, I set forth to plunder the wealth of knowledge found within.
Here was my first attempt: 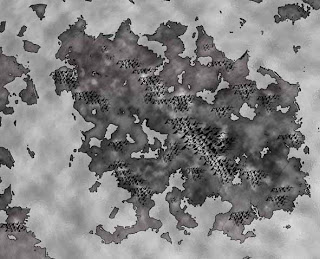 The basic land was made following the tutorial (minus the steps with colour of course) and the mountains were made with a small icon multiplied and resized until it covered the relevant places. I even had a go at the rivers, but it was then that I began to despair. Hand drawing the rivers seemed like too much work, and then there was the scale. At this size it was going to need over 100 towns, villages and cities to even get close to reality, and believe me, I have not made up (or even imagined) 100 places in my book.... There had to be an easier way.
Take 2: 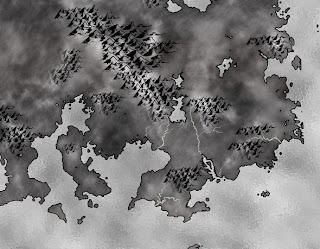 Things started to look more manageable when I cropped the map down to the lower right corner of the central continent. I'll mention here how much it bothers me in fantasy maps when the entire world seemed made of one island the size of tasmania rimmed in snow capped peaks... I'm looking at you Shannara I wanted something more realistic in my book, and so this scale seemed something that I could manage populating with the places from my book, but also large enough to hint at the rest of the land spoken about, but not seen in book 1 of the Magickless trilogy.. oh and the rivers? I grabbed a topographic map of a very famous river system and magic-wanded out the bits I wanted. Photoshop win.
But still a lot of work to do, and highest on the list. Place names.
So here is step three... 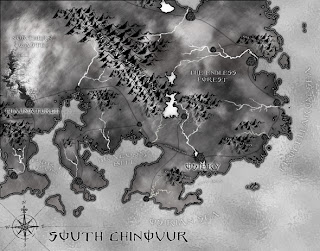 The names lifted directly from the book were easiest of course, and places unknown were marked with xxx. I sent a copy of this to my editor to show him that a map was starting to exist, and he questioned if "xxx mountains" were suitable for my target audience. I told him that's were the climax of book 2 happens, and not to mess with my precious creations. This was also a test to make sure my editor has a sense of humour. He does.
I also sent a copy of this to an ex student of mine, a young genius who's art folio for his last year of high school was to render fantasy worlds in 3d. More on him later when I talk of book covers again and the idea of book trailers, but the point of this is that he was luckily able to point out that the font I had chosen for the map -- a font I was quite fond of I must say -- was actually the font used in the "monster energy drink" logo. Sigh. Can't be havin' my world tainted by corporations just yet. I'll wait till the lego merchandising for that sell out thankyouverymuch..
My editor also made the point that the ratio is all wrong for a two page spread inside the book... well if you're giving a man two pages, you know he'll use 'em.
Step 4: 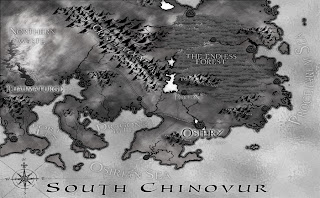 Lots added here, but though I was happy with the new font, I was still not so happy with a title at the bottom of the map... looks too much like a post card. Also, the forest seemed to work, but I wasn't so sure. So when one problem gets too hard, move onto something else: Names. I ain't going to give away where I got all my names from.... thats for me to know, and someone else to google.
Step 5: 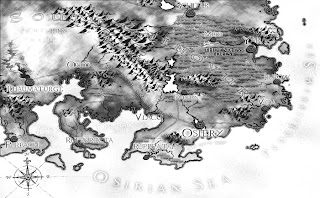 You can see I'm also playing with the adjustment layers in photoshop with abandon. But something still wasn't right. This indecision led me back to the place where I had first found the tutorial, and I asked the cartographers guild for feedback.
I got some.
So, without further ado, here is the latest in a long line of maps I have titled "final Chninovur map" I'm guessing it won't be the last. 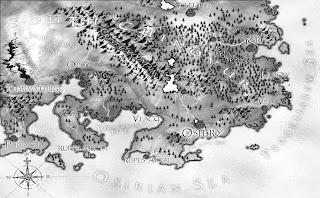