top 5 reasons to use scrivener

I'm done with Word. This was the last time I let microsoft turn my novel into this:

Each time this happens I lose a month of life. I have written before about the system I have in place to staunch the loss of words, but the scars remain. The fact that it happened again the week after I learned that Dragonfall Press was shutting down, led to a moment of sudden clarity.

I am free. Not only of the need to use Word, but free of the deadlines having a publisher brings with it; free of any pressure to make book 2 and 3 retcon the mistakes I now see in book 1. Free, in essence, to start again.

So I decided to do something drastic. What started as a tidy up of the Dragon and the Crow has turned into a complete re-write. What became apparent at once was the mess my mythology was in.

I'll digress a moment to talk about what kind of a write I think I am. As GRR Martin has defined it, I am a gardener when it comes to the craft. Some people call this being a 'pantster' (as in fly by the seat of), others just admit that they make it up as they go along. The opposite, of course, are the 'planners' or as GRR Martin calls them, architects. But even he admits that a certain amount of planning must happen if you don't want your garden looking like this.

Which is exactly the state I found Magickless to be in when I slowed down enough to have a look around. I'd much prefer something like Monet's green thumb attempts: 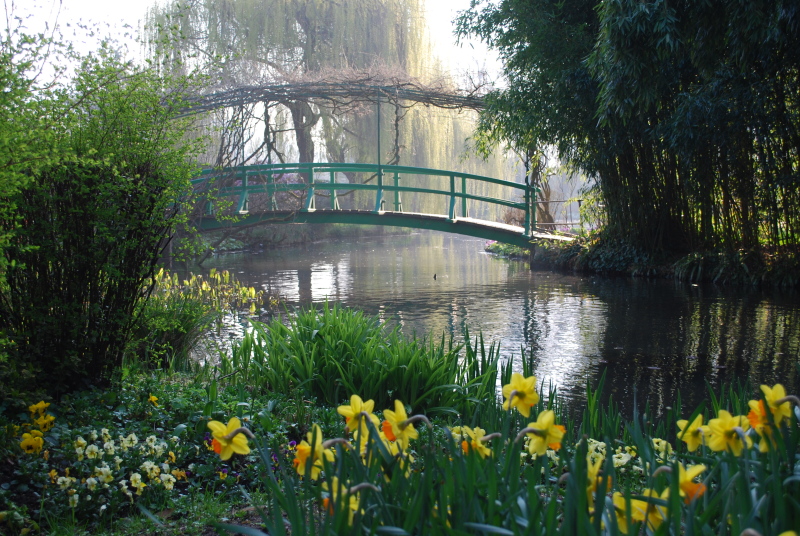 That of course, will take some work. Monet, I bet, had a few good shovels and wheelbarrows to help him make his garden. Hard work is easier with the right tool, after all. The right tool for a writer is not Microsoft Word. I optimistically opened my novels in apple Pages, but though the weird formatting bugs were gone, it was essentially the same as word. There were weeds running wild in my garden, and I needed a something more useful than a kitchen fork to deal with them. In essence, I needed something better than a word processor.

Think about that dubious software title for a moment: Word Processor. It suggests that its purpose is to churn out polished words on some kind of dictionary conveyor belt.

If you've ever tried writing something longer than a few pages, you'll know that the basic building blocks of the craft are not words, any more than a blacksmith's are individual atoms of iron. Writers work with things called scenes, and hammering them into shape is an art, not a 'process.' Word processors, to be honest, are not much better than pencils.

I posted my woes to Facebook, and a writer friend suggested that I give Scrivener a look. I'd heard about it, but the learning curve had scared me. This time I took the plunge.

Let me start with a big warning. Scrivener is a completely different way to write. But i'll let you do the research. Here are my top 5 reasons to use it.

Seriously, forget about it. Scrivener autosaves every second or so without interrupting your work. Just make the default location for your project a dropbox folder for peace of mind, and off you go.

2. Keep everything in one place

Everything to do with your WIP that is. I don't know how many different bookmarks and notes and rss meta tags I have created called 'notes' or 'research' or 'book stuff'--mostly because i've lost the majority and forgotten the rest. With Scrivener you have a built in research folder that can be used for note taking, or even better, you can drop a url of the wikipedia page about ship building into a sub-folder you have called 'sailing stuff' and the entire webpage is rendered right in your workspace, neatly filed away where you need it. But what about if you are on some other computer or your phone when you have an idea or find the perfect epitaph for chapter 8?

This seemingly innocent note taking tool built into scrivener has turned out to be a central reason I use the program. While there are many ways of taking notes, like the research folder I mentioned above, the Scratch Pad is a small rich text window that floats above all others. This is designed so that you can leave scrivener workspace to do some web browsing and the scratch pad window stays with you, allowing you to take notes on the fly. But the real strength of Scratch Pad, is how it stores its notes. I realised that I could make any folder I wanted my Scratch Pad .rtf document location, and this is when I realised that Scrivener can consolidate my writing life. I installed an app on my phone called Jota+--a basic text file program for android, and it saves all the notes I make with it in a dropbox folder. The same dropbox folder Scrivener uses. Now when I have an idea at 2am about how to fix the plot hole in chapter 14 (that thankfully no-one noticed at the time), I make a note on my phone, and the next time I open scrivener, there it is, right inside the program. This may sound trivial but it is actually transforming the chaos my garden was becoming.

Not only can you forget about having to save your work every few minutes, Scrivener does away with the need to set fonts and sizes for the text itself. You can also let go of the notion of 'styles' for headings and ignore the hidden voodoo of inserted page breaks or margin sizes. Scrivener works like software development. You write the code and then at the end you compile out the finished program. In the case of a novel, each scene is a file within a 'chapter' folder, which are embedded in 'part' folders. Each element is edited and then when you want to see what your manuscript is looking like, you compile a version in whatever format you desire. This is where you can set things like fonts and headings and chapters, but you can change them whenever you like, and can do so in a whole range of built in templates. To me, it feels now that I am working in the engine room of my subconscious. I am no longer caught up in how the text looks on page, just what it is saying.

Finally I have an adjustable full screen writing app. Even though scrivener is about seeing the big picture of your work, every now and then you just need to zoom in and lose yourself in the flow of writing. When you activate scrivener's full screen mode, all your scenes come together in one seamless scroll of words. With adjustable text and background colour you can even pretend you are hacking the matrix.

There is much more I will say about Scrivener another time, for I have only just scratched the surface, but if you fear you have more weeds than flowers, it might be the tool for you.

And of course, since installing it, I have not lost a single word.

The only problem is that now i'm worried I might be turning into an architect.