Thanks LJ Smith for tagging me -- look forward to reading the Last Lullaby!

1) What is the working title of your next book?

My next book will be called 'The Sceptre and the Sword' 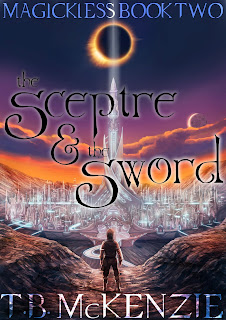 and is the sequel to my début novel, 'The Dragon and the Crow'

(Note on titles -- Early on I was going to use one-word titles for my series, but decided on the lengthier 'the-something and the-something' type. Why? Well not only do they seem genre appropriate, but they also hint at the morality tales of Aesop, who amongst others gave us 'The Ass, the Cock, and the Lion' which really would have changed the world of Narnia in interesting and confusing ways.)

2) Where did the idea come from for the book?

By my late teens I'd become fed up with the cliche 'chosen-one born with great power travels a faux-mediaeval world with a band of interesting friends all the while struggling with growing magical abilities on a quest to rid the world of evil' story line. You know the kind.

What had become clear was how little I could actually relate to the main character. Once upon a time the metaphor that we all have some innate ability/purpose in life just waiting to manifest was no doubt new and important, but I couldn't help but yearn for a different quest -- a different kind of dragon to kill.

I wanted to tell the story of a true outsider, not one with some unique super-human ability, but a normal kid in a world where everyone else was special. I wanted to play with the idea Syndrome has in the Increadibles: '..when everyone is super... no one will be.' Specifically, I wanted to find out what you would need to do in such a world to be super again.


So in book one we meet Brin, the boy with no magick, and the sequel continues his quest to understand his place in a world where everyone relies on (and has become complacent with) the magick they use every day.

In a way the Dragon and the Crow was a book of self discovery, and I hope The Sceptre and the Sword will be about the entire world undergoing a similar revelation.

3) What genre does your book fall under?

4) What actors would you choose to play the part of your characters in a movie rendition?

When I imagine Brin he has always looked like Bastian from the Neverending story. However not only is the actor far too old now to play a 15 year old boy with no magick, he hasn't made a movie since he became a Scientologist, so i'd have to go with someone else. Like the kid from Hugo perhaps.

The heroine of the story, Moropai, who decides that Brin is not the only one who gets to have all the fun, would need an actor like the girl who plays Sally Draper on Madmen. She has the perfect mix of sweetness and manipulative ruthlessness.

My favourite casting call though is for my main antagonist, the Warlock, who is essentially a cross between Westley from the Princess bride, and Loki from the Avengers. Since we can't have Tom Hiddleston play another naughty Wizard, there really is only one logical choice.

Okay this is proving more fun than I thought -- only a few more I swear.

Whilst the Warlock is the main antagonist, I don't define him as the bad guy -- that's reserved for the King who would be played by Ben Kingsley (no pun intended). His sons (the triplet princes) would all be played by Daniel Craig. And lastly, Brin's companion, the illusionist and former fox, Fennek, would be played perfectly by fellow Aussie, Ben Mendelsohn.

There are many others of course, but that will do for now....


5) What is the one-sentence synopsis of your book?

Hrrrm, tricky... its a sequel so I don't want to give too much away.... How about this.

Now that Brin has faced the King and embraced his past, he decides to continue  on the Witch's quest and rescue the true child of prophecy.

6) Will your book be self-published or represented by an agency?

Dragonfall press, the independent Australian publisher will be looking after the sequel.

7) How long did it take you to write the first draft of the manuscript?

This one took the better part of 2012 year to get done. This is a step up from the 5+ years it took for the last one. Next year though, i'm going to go down to part time teaching to try and finish the series. Turns out working full time and being a parent measures out my writing in afternoons and coffee spoons.

8) What other books would you compare this story to within your genre?

The feel I'm going for is definitely Lloyd Alexander's 'Prydain' chronicles, albeit with my aforementioned twist on the standard magic-is-rare medieval world you might expect. No one rides horses, for example. Why would you when you can conjure up a magick carpet or turn an ordinary chair into a speed racer? There is also a lot of Dan Simmons 'Hyperion' Cantos creeping into my book. To say more would be to give too much away.

9) Who or what inspired you to write this book?

I was first inspired to write this series from my own experiences as a high school teacher, seeing students grow ever more apathetic about the miracles of our age; computers, medicine, the fact that we can store almost the entire sum of human knowledge on a $9 piece of plastic and metal etc. seem to mean little to the current generation of pessimistic teens.

I want to show how a society can -- with just the right catalyst -- undergo a complete change of perspective, and that even though this might seem disruptive, even evil by some, such change is crucial.

But in the end, of course, i'm writing this for my son, both as something he hopefully gets a kick out of, and something that might also act as a warning about all the things that really scare me -- apathy, pessimism, and superstition.

10) What else about the book might pique the reader's interest?

As much as i'd love to spill the beans and tell you where the story is going, I don't want to ruin the surprise. Instead i'll mention that part of the internal consistency of building a world like Arkadia is the language of its people, especially the one they use to cast magick.

Now I'm no Tolkien, so instead of coming up with my own I stole an existing, albeit forgotten, language called Solresol for the purpose. It has been great fun these last couple of years to be part of a group of people trying to bring this musical language back into the world. I think it adds a lot to my story to have the characters wrestle with their own growing comprehension of the language of magick as we delve deeper into their world.

Now for some other great writers with Big Things happening:
Be sure to check out these authors next week!
Bob Ashby, Danny Fahey & D.J. Daniels